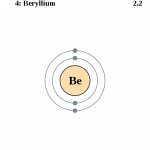 Beryllium is a strong grey metal, often found in gems. It was discovered in a semiprecious gemstone called beryl, which is where it got its name. You might have seen beryl in jewellery as green emeralds. Beryllium is really reactive and so hardly ever found in its pure state.

Because it’s a tiny atom with only four protons in its small nucleus, Beryllium is almost completely transparent to high energy radiation like X-rays. This makes it really useful for making windows in X-ray machines. The X-rays will go straight through a Beryllium sheet but the window is also able to keep air out of the machine (the machine needs a vacuum in order to work). 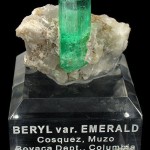 Since Beryllium is strong and stiff enough to withstand the pressure of a vacuum but also very light, it’s useful for making planes, missiles, satellites and spacecraft. They can be built light enough to get off the ground but also strong enough not to be crushed at high speeds or in space. Beryllium can also withstand temperatures of up to 1287°C before melting! This makes it much better than glass for use in the mirrors of space telescopes. NASA’s next giant space observatory, the James Webb Space Telescope, will have 18 hexagonal beryllium sections for its mirrors.